This is an educational documentary. Bill Nunn hosts this 50 minute special about the African legacy on Sapelo Island. Only the first two segments are shown here. Writer/producer Marti Covington worked with educators Gladys Twyman and the late Dr. Asa Hilliard III to put this program together. It was shown to sociologists from Georgia in 1995. School children contributed by drawing all maps seen in the series.

Hog Hammock is a small Geechee/Gullah community of about 45 people on Sapelo Island, Georgia. Geechee/Gullah refers to a distinct African-American culture that developed primarily along the Sea Islands of South Carolina and Georgia. The culture is called "Gullah" in South Carolina, and "Geechee" in Georgia. Sapelo’s Hog Hammock community is made up of the decedents of slaves who worked the plantation of Thomas Spalding. Spalding first brought slaves to the island in 1802, primarily from West Africa, Sierra Leone and bordering countries, for the Africans ability to cultivate rice and their resistance to malaria. Rice, cotton, indigo, and sugarcane were produced on the Spalding plantation. Left isolated, the Geechee/Gullah developed a distinct culture and language, a Creole based upon English and several African dialects. They have retained more of their African cultural roots than their African-American counterparts who have been interspersed through society. 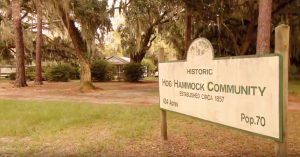 The human history of Sapelo dates back to about 4,500 years. Archaeological investigations on the island have determined an extensive Native American presence on Sapelo during the Archaic Period of pre-history (2,000-500 B.C.). The name Sapelo itself is of Indian origin, called Zapala by Spanish missionaries who established themselves on the island from ca. 1573 to 1686. The Franciscan mission of San Josef was situated on the north end of the island at or near the Native American Shell Ring, a pre-historic ceremonial mound that represents one of the most unique archaeological features on the Georgia coast.